Light Pollution is an important subject to all astronomers and the problem grows worse.

It is a sad fact that a whole generation is now growing up with little idea that stars exist and are in many cases even unable to see the brightest stars which form the constellations.

We all owe it to future generations to start taking an interest in this subject.

Even people with no particular interest in astronomy start to see the benefits when the cost in both monetary and environmental terms is pointed out. 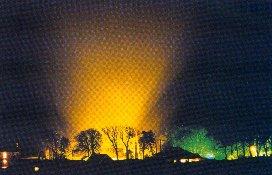 Whenever there is a building or lighting scheme near you please take the time to ask whether the lights will be properly shielded so that the light goes where it is needed and not straight up into the sky. This is an example of poor lighting. As in the case of many buildings ground level sodium lights have been aimed upwards, in this case to light a church tower, however all that is achieved is to hide the building behind a wall of light with most of the light just going up into the sky.

This was particularly important at the start of the new millennium when there were plans to floodlight 400 churches to celebrate. Higher lights on masts would be better but unsightly during daylight and downward lights bolted to the side of the church would not be possible where it was a listed building, so the issues were not simple. Assurances were given that low energy lights averaging 2 kilowatts would be used with light pollution kept to a minimum. Qualified engineers were to plan all schemes following the Institution of Lighting Engineers "Guidance Notes for the Reduction of Light Pollution".