I have devoted a specific page to Ancient Maps covering Antarctica, however, this is not the only area they cover. So what other parts of the world were mapped between 13,000 BCE and 4000 BCE ?

We must remember when considering ancient maps that it is only relatively recently that we have discovered the theory of Ice Ages and therefore when these maps were drawn you would not expect to see areas covered by ice. 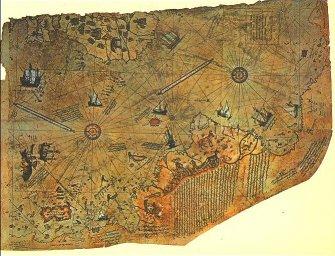 One is the 14th Century map drawn by Turkish Admiral Piri Reis. Drawn in 1513 it also shows features of South America which had not been discovered at the time. The Andes, with the Amazon rising in them, are shown (although the Amazon is shown twice, possibly due to source maps being overlapped wrongly) together with the island of Marajo which was not discovered to 1543. The Falkland Islands discovered in 1592 also appear.

It shows an island in the Atlantic which does not exist today but where isolated rocks are now found. So, was the map based on a source drawn when sea level was different and more land was above water.

In 1487 the "portelano" of lehudi Ibn Ben Zara was drawn covering Europe and North Africa. It seems to show glaciers as far south as the latitude of England and the Mediterranean as it would appear if sea levels were different due to the ice.

Another map was compiled in 1559 by Turk Hadji Ahmed. This shows Alaska and Siberia joined by land almost 100 miles wide. Again this shows conditions which existed prior to the end of the last Ice Age.

Claudius Ptolemy's "Map of the North" shows Sweden covered with remnant glaciers that would reflect conditions that existed about 10,000 BCE. This map, which was lost until the 15th century, was drawn by the custodian of the Library at Alexandria. He probably had access to many ancient documents and maps lost when the library was destroyed.

These maps seem to be evidence of an ancient civilisation capable of exploring and mapping the ancient world.