Today Antarctica is covered in ice and it was only in the late 1940's, when a seismic survey was conducted, that we got a "picture" of the land mass underneath. Why therefore are there earlier maps showing it's true shape.

In earlier times it was up to mariners to make their own maps and the usual practice was to copy one made by someone who had visited the place before you.

Another of these maps is the one drawn in 1531 by Oronteus Finaeus. Many features on this one such as the outline of the continent, the location of mountain ranges and the position of the South Pole closely match modern discoveries. However the coastal areas show rivers flowing from the mountains into the sea, although the interior shows none. This includes the area of the Ross Sea which today is a mile thick ice sheet. From this it is concluded that Oronteus copied maps (which themselves may have been copies of earlier ones) which were drawn by sailors who visited the continent in prehistoric times when the coast was ice free although the interior may have been glaciated. Bearing in mind the conditions in Greenland when the Vikings first visited such conditions would have been habitable. However for these conditions to exist the map must have been drawn during the last ice free period which came to an end about 4000 BCE and hence we have transoceanic voyages back so far that it must have been an earlier lost civilisation.

Is there any other evidence other than seismic surveys confirming the outline etc.?

Well in 1949 core samples of the sea bed under the Ross Sea were taken and while some layers show sediments associated with glacial climates other layers how sediments consistent with those brought down by rivers in temperate climates. A radioactive dating method on these sediments and the layer thickness showed that warm conditions had prevailed for a long period until 6000 BCE. After that glacial sediment started to appear until 4000 BCE consistent with glaciers starting to cover the continent just as the 1531 map shows 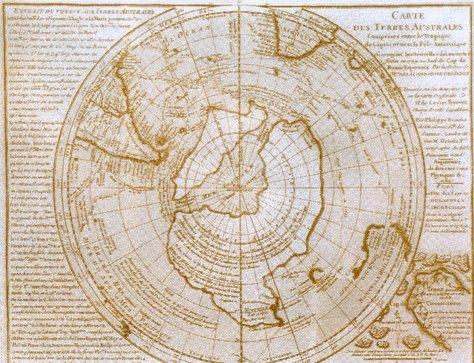 Gerard Kremer, better known as Mercator who developed the system we still use today to project the surface of the round globe on to a flat sheet of paper, in 1569 produced an atlas including maps of Antarctica which showed even more recognisable features. He spent many years researching and with additional features presumably had access to other ancient source maps.

In 1737 Philippe Buache published a map presumably based on even earlier sources as it shows the centre of the continent without ice and is the first to depict it as two islands with a water channel between which we now know would be the case if all the ice were to melt. The last time this condition is thought to have exited is about 13000 BCE

We are left therefore to decide whether there was an advanced civilisation 15000 years ago. It is disappointing that with "copies" being drawn as late as 1797 we are unable to trace the source maps today, however we undoubtedly have fairly accurate maps of something that could not possibly have been discovered physically at the time and I therefore think that this is true evidence to support the early civilisation theories.

There are also other ancient maps.