The Nazca Plateau in southern Peru is covered in straight lines and patterns. It was not until the advent of aircraft that these were recognised as they are on a very large scale. The question is why were they made? They are so large that no one on the ground could see what they were or appreciate them, the patterns are only visible from the air. 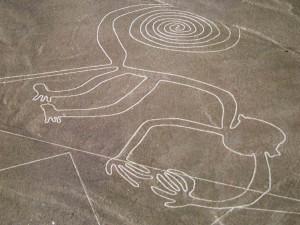 There have been some silly theories such as the straight lines being runways for alien spaceships but we'll ignore them.

Apart from the long straight lines (some over 5 miles long), and geometrical patters such as triangles, the shapes (there are over 100) appear to include a monkey, spider, whale, condor, fish, lizard and a hummingbird. This area is one of the driest on the planet and there is little erosion. Based on pottery fragments etc. found in the lines some experts date them to between 350 BCE and 600 AD though whether these clues were left .by the builders or were dropped by later passers by can not be said with any certainty.

As the basic lines and triangles etc. are in some cases cut into and across the more intricate patterns it is at least clear that the latter (more advanced) shapes are earlier.

The lines have now been checked for astronomical alignments and one of the theories is that the 150 ft. long spider is a representation of the constellation Orion and that the straight lines from it track it's changing position over the years of the belt stars. Another interesting thing about the spider is that it is a rare species only found in isolated areas of the Amazon forest. This is of course a wet environment and the species is unlikely to have been found in the arid Nazca area. It would also have been necessary for there to be contact across the high Andes in these primitive times. A lot of the other animals depicted are also out of place here.

So here at Nazca we have another ancient site which seems to have many common elements with the other archaeo-astronomy sites, it's large and difficult to do with contemporary knowledge and seems to be astronomically aligned. Orion is featured and the marks for changing positions of the stars seem to evidence a knowledge of changes which only occur on a scale of centuries.