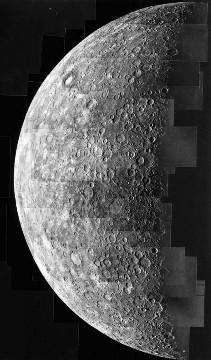 Mercury, the closest planet to the sun, was first visited by Mariner 10 in 1974/5

Only three orbits were completed, with photographs being taken on each occasion, and unfortunately the same half of the planet was imaged each time so the other halfremained unseen.

The planet was found to be without an atmosphere and heavily cratered like Earth’s moon, and its magnetic field was measured.

There was then a long gap until Messenger made three flybys before working its way into orbit about Mercury in March 2011.