These flyby missions were followed by the arrival, in July 2004 of Cassini, which went into orbit making a detailed study of the planet and it’s moons. 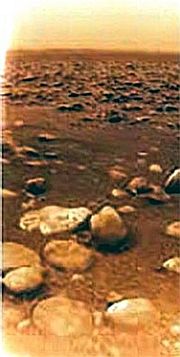 It was carrying the Huygens probe which landed on the moon Titan on 14 January 2005 sending back pictures of the surface and other data. This is the only moon with a dense atmosphere and is felt by some to be a potential Earth when the sun expands into a red giant.