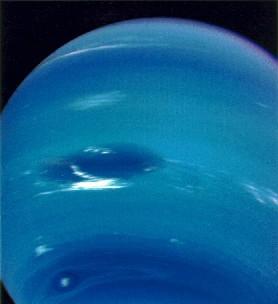 So far the only probe to visit Neptune has been the historic Voyager 2 mission.

This picture was taken 6.1 million kilometers from the planet and shows the great dark spot which was discovered by Voyager but which according to a Hubble photograph has since disappeared

The planet was found to have a magnetosphere highly inclined to the planets spin axis and an active atmosphere, which was not expected for a planet so far from the sun