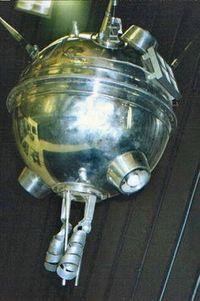 On 2 January 1959 at 16:41 GMT the Soviet Union launched a Vostok rocket from the Baikonur Cosmodrome carrying Luna 1, also known as Mechta (Dream). On the same day it became the first man made object to escape the Earths gravity and head towards the Moon.

The scientific equipment and the power unit were contained in a spherical container with a combined weight of 361.3 kg. Five antennae extended from one hemisphere and instrument ports also protruded from the surface. It contained radio equipment, a tracking transmitter, a telemetry system and to study interplanetary space a magnetometer, Geiger counter, scintillation counter, and micrometeorite detector.

It was intended that after its scientific mission of in-flight measurements the spacecraft would crash into the Moon delivering two metallic pennants with the Soviet coat of arms. The craft made valuable observations of the Van Allen radiation belt and also discovered that the Moon had no detectable magnetic field. It also made the first ever direct observations and measurements of the solar wind and became the first craft to use radio communication at a half million kilometres distance from Earth.

A malfunction in the ground-based control system caused the spacecraft to miss its target and it flew by the Moon. At closest approach on 4 January it was 5,900 km from the Moon and it then went on to become the first man made object to achieve a heliocentric orbit between the orbits of Earth and Mars. It was then dubbed a "new planet" and renamed Mechta. The spacecraft was originally referred to as the "First Cosmic Rocket" for achieving escape velocity but was renamed "Luna-1" retroactively years later.

within 5995 km of the Moon's surface after 34 hours of flight. It went into orbit around the Sun, between the orbits of Earth and Mars.

Whilst there was a malfunction, as the first craft to leave the Earth’s gravity this must be regarded as an iconic mission.