The lunar module with Armstrong and Aldrin aboard landed in the Moon’s Sea of Tranquillity at 4:18 p.m. EDT 20 July 1969 with the words "Houston, Tranquility base here. The Eagle has landed." 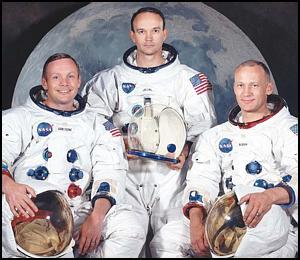 The crew then ate their first meal on the Moon and decided to begin the moon walk earlier than planned.

With a camera fixed to the Lunar Module providing live television coverage, Neil Armstrong became the first human being to set foot on the Moon when, at 10:56 p.m. EDT, he stepped off the Lunar Module and uttered the famous phrase, "That's one small step for a man, one giant leap for mankind." Aldrin followed him at 11:16 p.m. EDT.

Forty-seven pounds of lunar surface material were collected to be returned for analysis and their time on the surface included a ‘telephone’ call with American President Richard Nixon. The surface exploration was ended when after 2½ hours the crew re-entered the lunar module.

Mans first visit to the moon ended at 1:54 p.m. EDT on 21 July when the Eagle lifted off to dock with the Command and Service Modules in orbit. The crew transferred, and the ascent stage was jettisoned, and the motors were fired for trans-Earth injection. 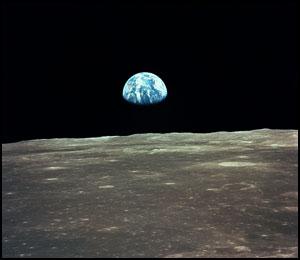 Bad weather made it necessary to move the splashdown point 346 kilometers (215 miles) downrange. The command module splashed down in the Pacific Ocean, after a mission lasting 195¼ hours, at 12:50 p.m EDT 24 July.

The Apollo 11 mission achieved Americas national objective, announced by President Kennedy, to land men on the Moon and return them safely to Earth, but it also achieved a rare moment of international unity as people from all over the planet followed the historic mission. Some of the stunning pictures taken from the lunar surface with the Earth just above the lunar horizon also made man more aware of just how small and insignificant the Earth is in the greater scheme of things and in its own way probably was one of the first triggers for the modern environmentalist movements.