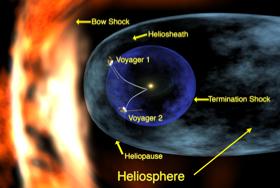 On 20 August 1977 Voyager 2, weighing 722 kg., was launched from the Kennedy Space Centre commencing a mission which continues to this day over 30 years later. It was followed on 5 September by Voyager 1. Their launch was timed to coincide with a rare alignment of the outer planets which only occurs about once every 175 years, enabling them to use 'gravity assist' to go on to the next object without expending vast amounts of fuel. The original mission was to do fly by studies of Jupiter, Saturn and their larger moons and hopefully go on to complete the 'Grand Tour' of the four gas giants.

Voyager 1 was the first to reach Jupiter with closest approach at a distance of 349,000 km. on 5 March 1979 followed by Voyager 2 on 9 July at 570,000 km. They had slightly different trajectories to achieve different goals and these arrival dates were the reason for their launch out of numerical sequence. Their transit of this system provided pictures of the great red spot and included the discovery of active volcanoes on Jupiter's moon Io.

Voyager 1 reached Saturn with closest approach at 124,000 km. on 12 November 1980 and after its flyby its trajectory, designed to get good images of Titan and the ring system, then took it towards the edge of the solar system. Voyager 2 arrived on 25 August 1981. As well as images of the moons, especially the atmosphere of Titan, they provided many stunning images of the ring systems.

Voyager 2 made closest approach to Uranus at 81,500 km. on 24 January 1986 returning detailed photos and other data on the planet, its moons, magnetic field and dark rings.

Voyager arrived at Neptune on 25 August 1989, discovering it's great dark spot, and then began it's journey out of the Solar System below the ecliptic plane

In 1990 the craft returned final images of the Solar System and began their interstellar mission to research the boundaries of the System.

On 17 February 1998 Voyager 1, which is travelling at 17 kilometres per second (38,000 mph), passed Pioneer 10 to become the most distant man-made object in space. It is heading roughly in the same direction as the Sun's motion measured against nearby stars and should therefore be able to measure any form of shock wave caused by this motion, the 'bow shock'.

The two craft are now approaching the heliopause where the Sun's magnetic field and the solar wind gives way to the interstellar medium. It is intended that the mission will continue after they pass through to allow measurements to be made of the interstellar fields, particles and waves unaffected by the solar wind. As of July 2007, Voyager 1 was at a distance of 15.4 Billion Kilometres (103 AU) from the sun and Voyager 2 at a distance of 12.4 Billion kilometres (83 AU).

In December 2004 Voyager 1 crossed an area known as the termination shock, where the million-mile-per-hour solar winds slows to about 250,000 miles per hour, into an area known as the heliosheath. They are expected to cross the heliopause 10 to 20 years after reaching the termination shock and it is expected that they have enough fuel and electrical power to operate until at least 2020 by which time, Voyager 1 will be 12.4 billion miles (19.9 billion KM) from the Sun. They should continue to wander space starting to pass other suns in about 40,000 years.

Had the mission ended after the Jupiter and Saturn flybys it would have changed our understanding of the Solar System, however, having continued they have returned to Earth information over the years that has revolutionized the science of planetary astronomy, helping to resolve key questions while raising intriguing new ones about the origin and evolution of the planets in our solar system.