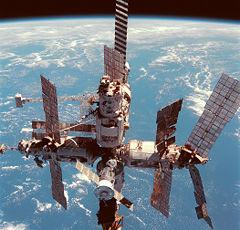 The first module of the Soviet Union's Mir space station was launched on 19 February 1986 at 21:28:23 UTC. It became the world's first consistently inhabited long-term research station in space, and the first space station to be constructed over a number of years with a modular design. It was assembled in orbit by connecting modules launched between 1986 and 1996. The station existed until 23 March 2001, when it was deliberately de-orbited and broke up during atmospheric re-entry over the South Pacific Ocean.

Leonid Kizim and Vladimir Solovyov were the first to dock with Mir on 15 March 1986, staying for 51 days to bring the station online and check its systems.

Mir holds the record for longest continuous human presence in space, just eight days short of 10 years, and after the end of the cold war was made internationally accessible to cosmonauts and astronauts of many countries. This included the American Space Shuttles visiting the station eleven times, bringing supplies and providing crew rotation.

The long term occupation began on 5 September 1989 and continued through the period of American shuttle vists which commenced in March 1995. This period also saw several severe emergencies, notably a small fire on 12 February 1997 and a collision with an unmanned Progress spacecraft on 25 June 1997 which left a hole in the Spektr module causing it to be sealed off and abandoned. Evacuation using the Soyuz escape craft was narrowly avoided on each occasion. In June 1998, the final U.S. Mir astronaut Andy Thomas left the station aboard the Space Shuttle Discovery.

The scientific research into the long term effects of weightlessness and the isolation and interaction of small crews in space conducted on these long missions will be invaluable when human crews seek to travel to the planets.