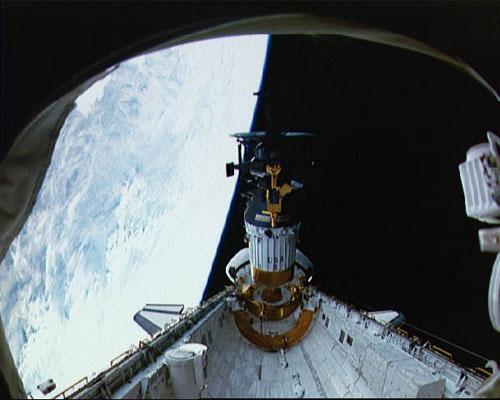 On 18 October 1989 the Space Shuttle Atlantis was launched with the Galileo spacecraft in the payload bay. Its mission was to study Jupiter and its moons in detail over a number of years. Galileo also carried a probe to drop through Jupiter's clouds and collect data. Galileo was launched from the cargo bay and Astronaut Shannon Lucid performed the delicate maneuvers that started the spacecraft on its journey.

The booster rocket that pushed Galileo into interplanetary space was not powerful enough to send the orbiter directly to Jupiter but the spacecraft borrowed enough energy from one slingshot of Venus and two slingshots of Earth to make the long journey. These flybys were used to test and refine the crafts systems and some interesting images of the planets and asteroids were returned.

In July 1994, Galileo was perfectly positioned to watch the fragments of comet Shoemaker-Levy 9 crash into Jupiter. The spacecraft made the only direct observations of the impact. Earth-based telescopes had to wait to see the impact sites as they rotated into view. 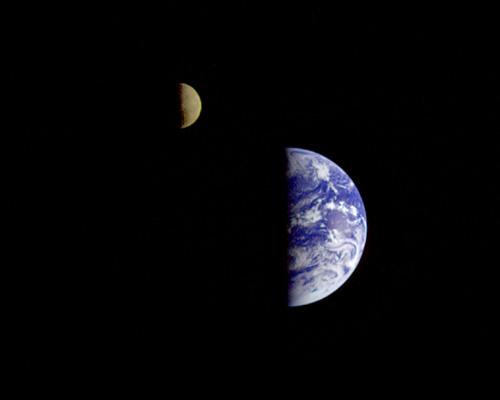 The Galileo spacecraft and probe traveled as one for almost six years but in July 1995 the probe was released and began a solo flight to Jupiter, diving into the atmosphere at 106,000 mph five months later. During its descent through 95 miles of the top layers of the atmosphere it took valuable measurements including wind speeds of 450 mph.

Galileo arrived at Jupiter and entered orbit on 7 December 1995. The craft traveled around Jupiter in elongated ovals lasting about two months which enabled it to pass the planet and various moons at different distances. The prime mission lasted for eleven orbits ending on 7 December 1997.

The mission was originally extended for 2 years (14 orbits) to study the icy moon Europa (and the theory that an ocean of water currently exists below the surface), Jupiter's thunderstorms the volcanoes on Io. It was then extended again until 2001.

As propellant began to run our there was concern to ensure that the uncontrolled craft did not impact Europa and affect any life in the possible ocean. It was put on a course for Jupiter and the mission ended when Galileo plunged into the crushing atmosphere on 21 September 2003. It had traveled approximately 4.6 billion km and endured more than four times the cumulative dose of harmful jovian radiation it was designed to withstand.