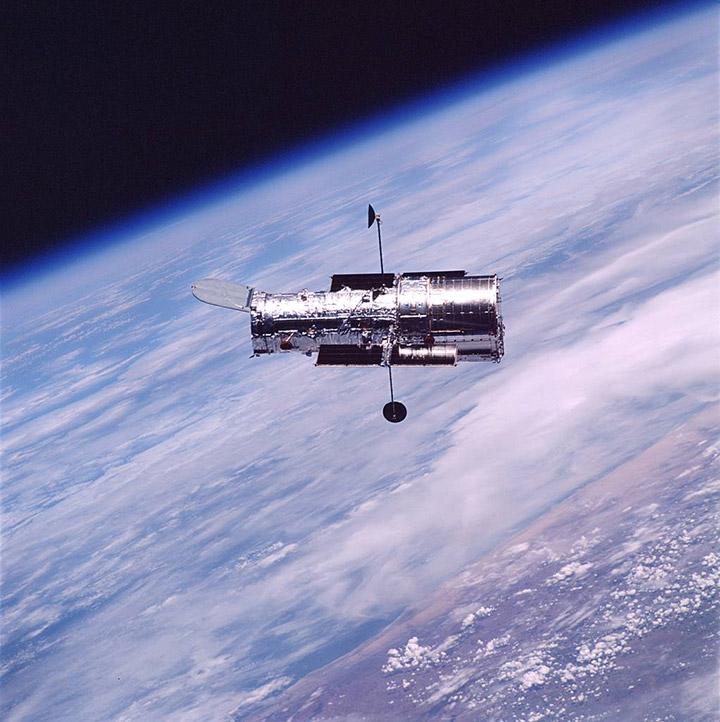 The Hubble Space Telescope was launched into space aboard Space Shuttle Discovery on 24 April 1990 and with it's discoveries became one of NASA's most successful and long-lasting science missions. Its position orbiting above the Earth's atmosphere, which distorts and blocks the light that reaches our planet, enabled it to surpass ground-based telescopes although technological developments during it's long mission reduced the initial large difference.

The discoveries made transformed the way scientists looked at the universe with sharp detailed images enabling them to prove theories. It's ability to look at remote galaxies whose light is reaching us after millions of years enabled scientists to look back in time and work out how the universe has developed over time and the evolution of stars.

Amazingly when Hubble was first launched it was discovered that the primary mirror had not been checked properly and had a flaw called "spherical aberration" making the images blurry. Fortunately this could be corrected by a series of small mirrors intercepting the light reflecting off the mirror. NASA astronauts spent 11 months training for one of the most complex space missions ever attempted, then on 2 December 1993 the Space Shuttle Endeavor carried a repair crew into orbit. During their five day mission of spacewalks and repairs they replaced some instruments with corrected ones and performed a host of other tasks. The first new images released by NASA on 13 January 1994 proved they had been successful .

Over time further repair missions in February 1997, December 1999, March 2002 and May 2009 kept Hubble operating and installed some improved instruments. The following image shows the galaxy designated Messier 100 taken before and after the first repair mission.

One of it's most important images was the Hubble Deep Field (HDF), an image of a small region in the constellation Ursa Major, constructed from a series of observations. It covers an area 2.5 arcminutes across, two parts in a million of the whole sky,and was assembled from 342 separate exposures taken with the Wide Field and Planetary Camera 2 over ten consecutive days between December 18 and December 28, 1995. 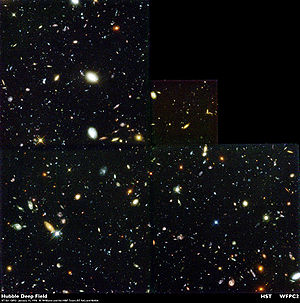 The field is so small that only a few foreground stars in the Milky Way lie within it; thus, almost all of the 3,000 objects in the image are galaxies, some of which are among the youngest and most distant known. By revealing such large numbers of very young galaxies, the HDF has become a landmark image in the study of the early universe, with the associated scientific paper having received over 800 citations by the end of 2008.

Three years after the HDF observations were taken, a region in the south celestial hemisphere was imaged in a similar way and named the Hubble Deep Field South. The similarities between the two regions strengthened the belief that the universe is uniform over large scales and that the Earth occupies a typical region in the universe. In 2004 a deeper image, known as the Hubble Ultra-Deep Field (HUDF), was constructed from a total of eleven days of observations. The HUDF image wass the deepest (most sensitive) astronomical image ever made at visible wavelengths.