In the study the evolution of the universe a key is to learn about stars. In view of the great distances involved the study of the nearest one, our sun, is vital.

On 2 December 1995 at 08:08 UT SOHO, the Solar and Heliospheric Observatory,  was launched by an Atlas II-AS (AC-121) from Cape Canaveral Air Station on December 2, 1995, at 08:08 UT. It is an international project between ESA and NASA to study the Sun from its deep core to the outer corona and the solar wind. 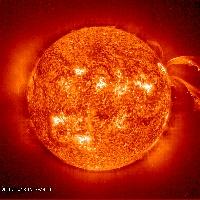 The spacecraft moves around the Sun locked to the Earth-Sun line. It achieves this by slowly orbiting around the First Lagrangian Point (L1) where the combined gravity of the Earth and Sun keep it in position approximately 1.5 million kilometres away from Earth. This position gives it an uninterrupted view.

Contact with SOHO was lost on 25 June 1998 but was recovered after a rescue effort. Normal operations were resumed in mid-November 1998.

The continual monitoring of sun spots, the corona, the magnetic field and the solar wind have also enabled scientists to issue warnings when dangerous solar storms are likely to affect the Earth. SOHO has also discovered over 1500 comets.