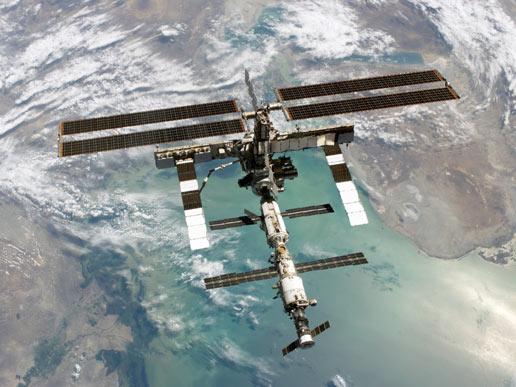 The International Space Station (ISS) is a habitable, artificial satellite in low Earth orbit and is the first International project after the end of the 'Space Race'. It follows previous national stations such as Skylab and Mir and is used as a research laboratory that has a microgravity environment in which crews conduct experiments in many fields including biology, human biology, physics, astronomy and meteorology. Construction started in 1998 and it is expected to remain in operation until at least 2020, and potentially to 2028. The ISS is operated by Expedition crews, and has been continuously staffed since 2 November 2000.

The ISS was built up from various modules provided by contributing nations and orbits between 278 km (173 mi) and 460 km (286 mi) altitude, and travels at an average ground speed of 27,724 km (17,227 mi) per hour. It completes 15.7 orbits per day. The five participating space agencies are the American NASA, the Russian RKA, the Japanese JAXA, the European ESA, and the Canadian CSA and so far (2011) it has been visited by astronauts and cosmonauts from 15 different nations.