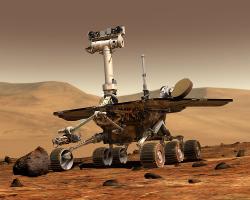 In 2003 two Mars Exploration Rovers were launched, Spirit (MER-A) and Opportunity (MER-B), with the aim of exploring the Martian surface and geology.

The mission's scientific objective was to search for and characterize a wide range of rocks and soils that hold clues to past water activity on Mars and was intended to last for an initial period of 90-Martian-days (sols) however they far exceeded this expectation.

On May 1, 2009, during its fifth mission extension, Spirit became stuck in soft soil on Mars and after nearly nine months of attempts to get the rover back on track NASA announced on January 26, 2010 that it was being retasked as a stationary science platform. However Jet Propulsion Laboratory (JPL) lost contact with Spirit after last hearing from the rover on March 22, 2010 and continued attempts to regain communications until May 25, 2011 bringing the elapsed mission time to 6 years 2 months 19 days or over 25 times the original planned mission duration.

As of November 2011, Opportunity continued to explore the surface.